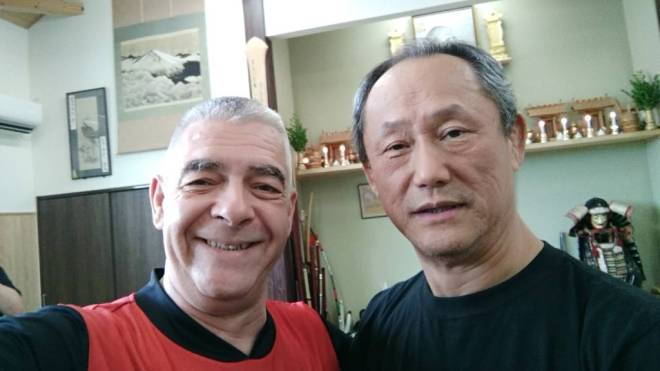 Nagato sensei in his Sunday class, sounded like Descartes, when he explained that 順番, Junban was important. (2) Junban is doing the necessary steps to do a technique in the proper order. Each movement calls for the next and the order of things is vital to the realisation of the effect. Too often we watch the technique, memorise it wrong, and force it, by using strength and unnecessary power. The Omote looks quite the same, the Ura is missing.

This is because the techniques we watch are not the technique we do. Our senses perceive reality correctly, but our brain translates it wrong. The attempts we make are not good because even if we have the general idea, we don’t have a clear vision of the details.

The one thing that is missing is the proper order of things, Junban. We might have memorised all the steps, but they are not executed in the correct sequence.

If you want to build a house, you need foundations, then walls, then a roof,  in this order. You cannot paint the walls if they are not built yet. There’s an order.

The same goes for a technique and this is the meaning of Junban.

In his book, Descartes writes “divide each difficulty into as many parts as is feasible and necessary to resolve it”. This is exactly what we don’t do during class. We see the technique as a whole and don’t pay attention to the details that are necessary for the technique to be alive.

The lack of understanding of what is displayed in front of our eyes, pushes us to speed up the steps, in the hope that the outcome will be similar to what we saw. It is never the case. Speed and force are useless.

Nagato sensei often says that “only stupid people train fast”. That we should “train slowly!” and he is right. By training slowly, we are able to see what we didn’t see when the movement was done.

The trend for MMA, pushed many Bujinkan teachers to add a more “realistic” touch to their Bujinkan moves. This is an illusion. Going fast might work, but will not teach you the true essence of a waza.

Junban is the key to good taijutsu. When you respect the proper steps of a technique,  slowly, you discover that you don’t need speed nor force to do it. Strangely, it will work with any opponent even if they are fast and brutal. Because the secret is not in learning a technique, but in absorbing and ingraining it, so that the acquired Kaname will be adjusted to the encounter.

Remember what you hear in Japan:

Chikara janai: If you use force, you got it wrong (3)

Descartes also said “Nothing is more fairly distributed than common sense: no one thinks he needs more of it than he already has.”

If you remember what Hatsumi Sensei said about the Kankaku of senses, I guess that Descartes is right. We have to connect to Daishizen in order to increase our common sense. (6) It’s a question of survival. Junban is the key to our understanding of natural Budō.

Japan is always full of surprises. I never expected Nagato sensei to remind me of French philosophy.

So, do you think Nagato sensei is Cartesian? (7)

7. René Descartes is also the creator of modern geometry. This is thanks to his works, that we are able to use the GPS today, and find our way easily.

Proper Bujinkan training is the GPS of your path to become one with nature and not to be lost in the process.