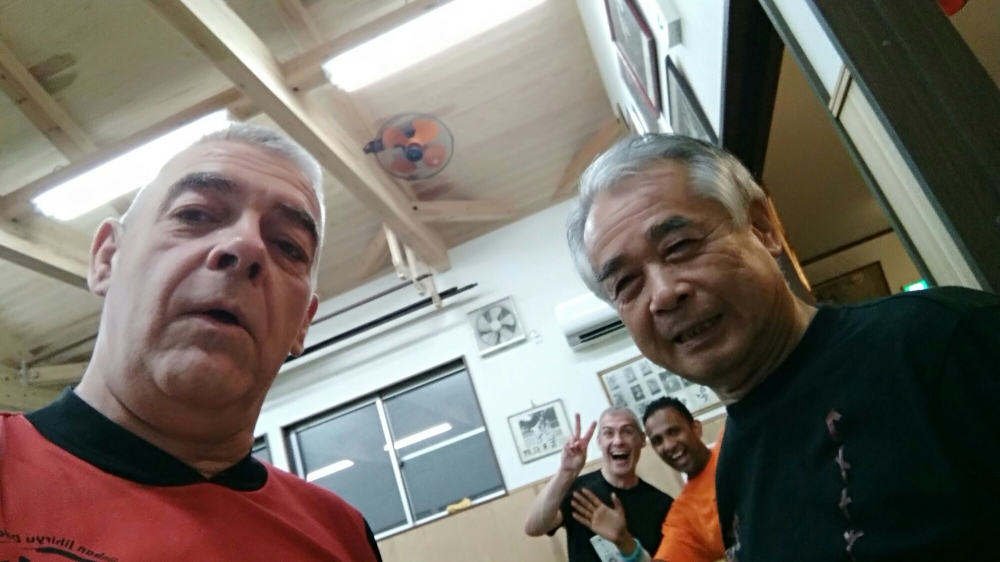 I entered the dōjō and only 16 participants were there it was a luxury. I’m so used to see the honbu packed that such a small number is like having a private lesson. For some reason (maybe the summer heat) only a small group decided to attend Noguchi sensei’s class.

As always with him the 90-minute was intense. We covered the first level of the Shinden Fudô Ryû,  and I was lost after ten minutes. Noguchi sensei is so creative in his interpretation of the techniques,  that it’s often impossible to reproduce without thinking. It is like going back to beginner’s level. And once again I learned a lot.

What I like with Noguchi sensei is that each one of his classes is a Sanshin: you deepen things that you know, you review concepts that he taught in the past you discover new things.

I can resume the sanshin of the class with three words: Ô Gyaku, Yorimodori,  Hagaijime.

When you’ve been training for a few decades  you naively think that you know your basics. No you don’t! Until yesterday I thought that in Gekkan the Ô Gyaku was a shoulder technique where you lift the extended arm by locking the shoulder nearly vertically to push uke face down. If this is the basic form, I didn’t know that you could also do Ô Gyaku when the extended arm was positioned horizontally behind uke’s back. I should have known that as the shoulder lock is the same. Only the angle differs. When you use it then uke’s balance is taken sideways, and prevent him from landing softly. Try it in your next training.

With Setsu Yaku, we reviewed the concept of Yorimodori. I already wrote  a few trips ago  about it (check the blog). If you didn’t read it, it’s a “down – up – push –  pull” movement a shape of a horizontal “8” (¤¤) that you apply to the attacking arm. Uke is put off balance and his body wraps around yours and fall. It is highly technical and beautiful to watch. It is even better when you finally succeed. The timing has to be perfect to make it work. It was nice for me to review it.

Noguchi sensei introduced a new concept (at least I didn’t know it). He called it Hagaijime (1).

On one of the technique of the Shinden, Noguchi sensei was holding the uke by locking the shoulder and elbow joints. Uke was bent forward with his arms extended and locked (body in a “T” shape). The upper arm locked by the neck, and the lower arm sorted by Tori’s leg with an armbar done with the body  We did it in front and then in the back this time keeping the arms extended behind in a short of Ryō Ude Jime. In the front (T), or in the back (ude jime) Uke was unable to take Ukemi, and each time would land on the floor, face first. Obviously we didn’t do it to the end.

Everything came up without effort the body movement wrapping  uke through the body flow.

It was indeed an interesting class and reviewing the first level of Shinden one again, was refreshing. I have done all of these techniques many times since my first trip here in 1990. And I’m grateful to the Japanese Shihan to have so much creativity,  as it gives us new insights on his to understand the waza

Yesterday Nagato sensei spoke of Kimatenai (2),  “nothing is decided”, this also works with specific waza. Once you know the steps (omote), the next level is to get the ura, break the form and make the Kaname alive in a different way in order to survive. Because in a real fight “nothing is decided”.

1.  羽交い絞め/hagaijime/pinioning; binding arms behind the back