Omnia causa flunt, “Everything happens for a reason.”

I like this Latin expression. This is precisely the same in Budō. We don’t do movements to look good, but to stay alive. If being elegant was the goal, we would be dead. At war, the only goal is to stay alive, to carry out the mission. In life, awareness will do the same. If you want to live a successful life, you have to accept the law of causality. Because whether you want it or not, “Everything happens for a reason.”

During the warring period of feudal Japan, the Samurai might have followed the same rule. Marshal Bugeaud, a French officer from the 19th century, said, “at war there are principles, but they are few.” It is the same in Budō and in life.

Hereunder are six basic principles that each practitioner should train and apply. Let’s review them together. They are suitable for Budō and for life.

That is the best principle of all. Often, speaking and communicating will get you out of a bad situation. But it will not work every time, and you will not be able to avoid the attacks. Then accept it, stay relaxed and let your training do it for you. The same applies to Budō and in life.

Don’t dream! In a fight, you will get hit, and it will be painful. Abandon any romantic vision displayed by the movies. You are not an actor in Hollywood, this is the real world. Wake up! Focus on the situation you are facing, and limit as much as you can, the efficiency of your opponent. The same applies to Budō and in life.

Keep a proper and correct distance.

This is the first thing to do. If you are out of reach, Uke will not touch you. Now don’t overestimate your chances. When you have a gun in a holster and him a knife in his hand, you cannot draw fast enough if he is at less than 8 meters. So instead of trying, move away from his line of attack. It is always better to avoid direct confrontation. The same applies to Budō and in life.

Move out of the line of attack.

To do so, you have to react by the lines of cutting, punching or kicking. Against a sword, visualise the plane of cutting and stay out of it. Training your distance and understanding the angles will keep you safe. Move where your attacker will not be expecting you. Every attack generates dead corners preventing the opponent from getting you. Learn these. Usually it is by putting the attacking fist or weapon between you and Uke’s body. His body will serve as a shield. Look at how Sensei is always well positioned. Don’t be a target. The same applies to Budō and in life.

Expect Uke’s moves, understand the loss of balance consecutive to his actions. When you move at the right moment, the attacker is unable to change his direction and to adjust his actions in time. If he does, it will be detrimental to his balance. He will crash faster. The momentum of his movements will make him fail. Your ability to expect what is coming next is the key to your success. The same applies to Budō and in life.

Begin one thing and do something else. A deception is a vital tool in your arsenal. The body reacts before the brain has time to analyse what is happening. Thus any move out of the logic forces Uke to change his attack, but this is useless. The momentum of the initial steps will forbid him to change his movements. The same applies to Budō and in life.

When you look at this list, you have, more or less, the exact definition of the Mutō Dori we learn these days in Japan. What Hatsumi Sensei teaches is not mechanical anymore. It is a holistic understanding of life and Budō. This allows us to get the intelligence of the moment. His Mutō Dori is not limited to Budō, it is something that you can use in your everyday actions. Every move we learn was not created by chance. The waza are there because they are useful. When it comes to applying these techniques, everything is always “undecided.” This is how Sensei’s movements look so natural.

The reason why he moves the way he does is that his body has ingrained all movements. He expresses them now without thinking. He is Mutōsei, uncontrolled (1), and because of that, he can control the attackers.

Omnia Causa Flunt, “Everything happens for a reason.” 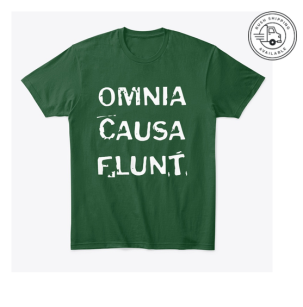