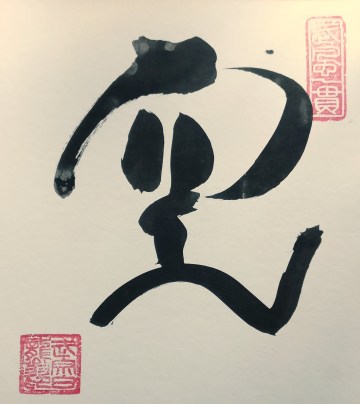 Teaching the Mutō Dori of 2018, Hatsumi Sensei keeps repeating it is about control. But the control he speaks about is different from the general understanding we have of this word.

During the calligraphy session, I asked for “control,” and he did “Kū.” (1) Because it is one of the few Kanji I can recognize, I looked at him interrogatively, and he smiled.

In the train back to Kashiwa, I thought about it.

Kanji are pictographic. A word or a sentence always have several possible interpretations. And often, they are complementary even if they don’t define the same object.
We established the relationship between humans and Kūkan (see the previous post). That is why we can control the opponent in Nature, as we are of the same nature. Every action happens without thinking, spontaneously. (2)

Yesterday, he spoke about Shizen Ryoku, which I choose to understand as “power of Nature.” (3) This power of Nature is something that “is” without any human conception. It is Shinyo, the ultimate nature of all things. (4) Shinyo is “thusness” or “suchness” in English, a rare term, meaning “The state of things being as they are.” (5)

Isso Chozanshi wrote: “envelop the universe by means of my mind; and by means of the universe, there is nothing that obstructs my mind. Riches and honour, good luck and calamity are elsewhere. When you seek after such things, you may obtain them or you may not—this is not something that is guaranteed. The Greatest Happiness is within yourself. If you seek your mind wholeheartedly, you will obtain it for sure. Simply, do not seek after illusion.” (6)

And this “natural state of things as they are” is what we see when Hatsumi sensei does a movement. As one of his Uke said: “he doesn’t seem concerned by the attacker.” Sensei moves without intention. This kind of disregard, allows him to control Uke at the physical and mental level.

The control is total and permanent. Even before the launch of the attack. Sensei moves in another dimension, the dimension of Nature. He is manifesting something beyond our understanding: the tesseract of Nature. I was not sure I could speak about the tesseract. But my partner said that everyone today is familiar with the term as it used in one of the Thor movies. But I put a link below. (7)

This level of Budō is far beyond our reach, but at least we can see it. There is no more Waza, and Sensei ion his last classes stressed that many times. A technique is only mechanical. You have to train the Waza, but this is not where your learning path ends. Once your movements are natural, the tesseract level of Budō can be achieved. You will not learn how to do that in a Densho. Because a Densho deals only with the physical world (8) Sensei’s gives us something more important: a Denshō, a real transmission! (9)

He illustrated it by attacking Uke with a sword. He struck Uke in slow motion, and the opponent couldn’t counter the cut. Sensei explained that attacking as fast as possible was the best way to get countered. The quicker you go, the more locked you are. When he moves, you cannot alter your course of action. You watch him defeat you. He added that is why doing Tameshi Giri (10) was useless as anyone can cut straw mats. But, when the straw mat has a weapon and tries to cut back at you, it is entirely different”. To sum up this, I would say, don’t fight scarecrows!

Later, he asked his partner to cut him. And even though Uke thought he had him, Sensei was not there when the blade came. Uke said “attacking Sōke is like trying to cut through a Noren. It is impossible because the blade pushes and cannot cut the fabric”. (11)

In the 4th dimension where Sensei moves, we are trying to fight Kūkan, the universe, uselessly. That is why he repeats “Tatakai Janai,” There is no fight!

The warrior martial arts of the Bujinkan are not for killing, but for peace. That is the tesseract: the 4th dimension of Nature.

1. 空, Kū: sky; the air; the heavens; weather; the state of mind; feeling; falsehood; lie
2. 自然, Shizen: nature, spontaneous, Nature
3. 自然力, Shizen Ryoku: The power/strength/ability of Nature. Or natural power/strength/ability!
4. 真如, Shinyo: tathata (Sanskrit), the ultimate nature of all things. Cited in “Advanced stick fighting” by Hatsumi Sensei, p38
5. Thusness: https://en.wiktionary.org/wiki/thusness
6. https://cultofnyarzir.wordpress.com/2014/07/07/a-review-of-the-demons-sermon-on-the-martial-arts-by-issai-chonzanshi/
https://www.goodreads.com/book/show/455922.The_Demon_s_Sermon_on_the_Martial_Arts
7. Tesseract: In geometry, the tesseract is the four-dimensional analogue of the cube; the tesseract is to the cube as the cube is to the square. Just as the surface of the cube consists of six square faces, the hypersurface of the tesseract consists of eight cubical cells.
https://en.wikipedia.org/wiki/Tesseract
8. 伝書, Densho: book or scroll that has been handed down through generations; a book of secrets
9. 伝承, Denshō: handing down (information); legend; tradition; transmission
10. 試し切り, Tameshi Giri: cutting test
11. 暖簾, Noren: (short) curtain hung at shop entrance; split curtain used to divide spaces in a house.

NEW FOOTAGES AND DOCUMENTS AT KOIMARTIALART