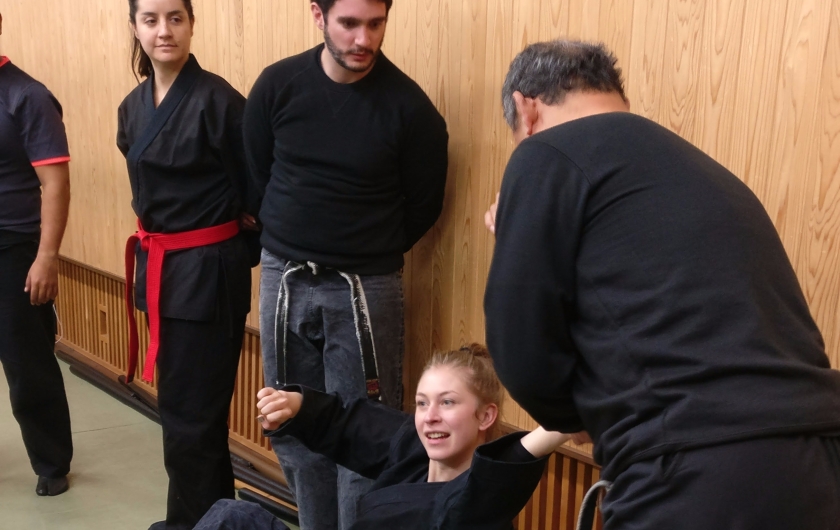 Nagato sensei’s main idea was to remain protected at all time. This is Tōtoku. (1)
Even though Tōtoku uses a sword, in theory, the concept is also valid for regular Taijutsu. That was what we did during the whole class. uke attacks with a double Tsuki. You block and absorb the first fist with your left. Then you position your left forearm vertical like a shield. When the second fist arrives, you can deflect the attack and hit at the same time. Being protected is something that Hatsumi Sensei repeats a lot these days. The control of the situation in the spirit of Kannin Dokuson (2) is the essence of Mutō Dori.
Nagato sensei did many variations on the concept of Tōtoku. He was turning around the attacker, staying always out of reach, and always able to finish him. I love his footwork because he moves a lot around (Mawari) and does not pivot (Mawashi). To make you understand the difference between the two, imagine a merry go round. The horses on the periphery are moving in Mawari. The centre axis of the merry go round is doing Mawashi. (3) That way of moving is typical of Koppō Jutsu, and the specificity of his taijutsu. Turning around the attack and the attacker, Nagato sensei can use his elbows to control. His elbows then are the Shiten (fulcrum) (4) and his hands can deliver powerful shutō to the neck.
When you train in Japan it is always nice to train with Noguchi Sensei and with Nagato sensei. I find their taijutsu very different and at the same time very complementary. Noguchi sensei is moving in a Kosshi Jutsu manner where Nagato sensei is more of the Koppō Jutsu type. Remember that Koppō and Kosshi are very close when it comes to reacting under duress. Koppō when you are further, Kosshi when you are closer.

At the end of the class, Nagato sensei answered many questions about training. He shared with us many insights on how training was at the start of the Bujinkan. He said that those discussions were common practice after Sensei’s class.
In fact, I remember spending whole afternoons at Sōke’s house in the 90s with Pedro. Sensei would show us old footage of Takamatsu, scrolls, and many other documents. I loved these moments.
Nagato also explained that times have changed. The type of training of the past cannot be anymore. That is because the new generation couldn’t accept the pain that was part of training fifty years ago. When I first came to Japan in the 90s, I remember that pain was an important part of training. It was common to keep bruises two or three weeks after returning to France.
He said many things that I didn’t know and that was nice.
In the old days, there was no Honbu Dōjō. They would train in Sensei’s house. Its nickname was “jungle house”. They trained in a ten-tatami room (approximately 20 square meters).
Things have changed and today’s training is easy when you compare it to the beginning. The first Honbu opened only in October 1997!
Training in Japan is not limited to its physical aspect. Those discussions are an important part of your training as a student.
If you limit the Bujinkan to the body movements, then you are practising a sport, not an art. The Bujinkan is not a sport. There is nothing wrong with doing martial sports. Nagato sensei said we should also train them if possible. But remember that Bujinkan arts are not sports. What we learn here is about surviving a real fight where there are no rules.
Some practitioners are critical about the lack of Randori. (5) Nagato sensei said that, in the old days, they had Randori training. But the type of Randori was very different from what we have in Jūdō. It was only slow-motion, trying to use no strength at all. That is why he keeps repeating that “only bad practitioners train fast and use strength”.
So, when are you coming to Japan?
__________________________
1. Tōtoku: 刀匿, to shield yourself with the sword. Like in 刀匿表紙の構え Tōtoku Hyōshi no Kamae, where you cover yourself by using the sword as a shield to protect you from shuriken.
2. Kannin Dokuson is the theme for 2017. You have to respect yourself, the opponent and the situation. 貫忍 独尊 Kannin Dokuson. Check HERE
3. We studied Mawari when with the Kunai of 2003, with a technique called “Mawari Dori”. Koi members. Check it at
www.koimartialart.com
4. Shiten: see the previous post HERE
5. Randori: 乱取り, is a term used in Japanese martial arts to describe free-style practice. The term means “chaos taking” or “grasping freedom.” It implies a freedom from the structured practice of kata. Randori may be contrasted with kata, as two potentially complementary types of training. The exact meaning of randori depends on the martial art it is used in.
www,budomart.com
33% discount until I return from Japan on the 6th of December. Visit budomart now!