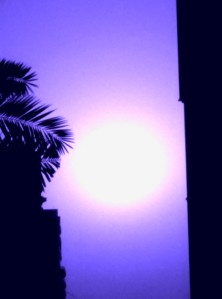 One evening in Abu Dhabi, I was teaching outdoor the concept of mienai waza (見えない 技) next to the Laguna. With the light fading away, the whole mienai concept made more sense. I don’t know why, but it reminded me of the gecko lizards I keep observing in Bangalore. When in India, at night, on the balcony, I spend a lot of time watching the gecko lizards* stuck on the walls and the ceiling. They call each other with a very sharp yell because they are often on different planes, they don’t see each other until they are face to face on the same level. For them, the world is always flat. There are no angles, no up and down, no horizontal or vertical. Everything is flat.

It is the same in a Bujinkan technique, and we have to train to change our perspective. Only then can we adjust our moves to what the encounter is requiring. There is no beginning, and there is no end as long as we keep going. It is uke who gives the time and space of his downfall.
There is always a solution waiting ahead. “Ahead lies paradise,” says the Takagi Yôshin ryû, but ahead can be anywhere because we move in the world of Juppô Sesshô, in the ten directions. We have to transform our perception of reality in order to overcome the attacker. And rushing is never the answer. Time and space are everything, and if you move forward to early you will miss the opportunity that proper timing has to offer because you will not be in the slave where victory was waiting for you. Waiting for the good moment impose the ability to stay out of danger.

Like Sensei, I’m not a great fan of Sunzi’s “Art of war”** that I found quite primitive when compared to the anonymous “36 strategies”. But some chapters are interesting and can help us understand the simple complexity of Hatsumi sensei’s vision of Budô.

Sunzi said, “The good fighters of old first put themselves beyond the possibility of defeat and then waited for an opportunity of defeating the enemy.” The Bujinkan teaches to protect oneself first. So why is it that many practitioners are rushing toward their death? Your priority is to stay alive in order to defeat the attacker. Reverse this natural order, and you will meet your creator.

I’m always fascinated when I see Bujinkan practitioners using strength and power when the obvious answer is to relax and to wait. The enemy always come up with the solution to defeating his attack.

Sunzi adds that “to secure ourselves against defeat lies in our hands but the opportunity of defeating the enemy is provided by the enemy himself. Thus, the good fighter can secure himself against defeat but cannot make certain of defeating the enemy.” In order to give time a chance to unfold the opportunity for you to defeat the attacker, you have to keep going. The attacker’s intent brings the solution.

This attitude of letting things follow their way is what sensei means when he wants us to become zero. Surfing on the permanent unfolding of events, you can understand and follow nature’s will.

Keep going! Never give up and walk at the right pace the circle of life. When you follow the circle (ura or omote), you are always walking on a straight line.

There are no angles, no up and down, no horizontal nor vertical. Everything is flat.

Being “zero” is the path of the straight circle.

** Back in 2009, I was telling Sensei that after studying extensively the “Art of War” for a lecture for HP, I discovered that the book that had accompanied me since I was 18, was quite empty. His answer was: “yes indeed, in fact this is also what Takamatsu Sensei told me”. I felt better.