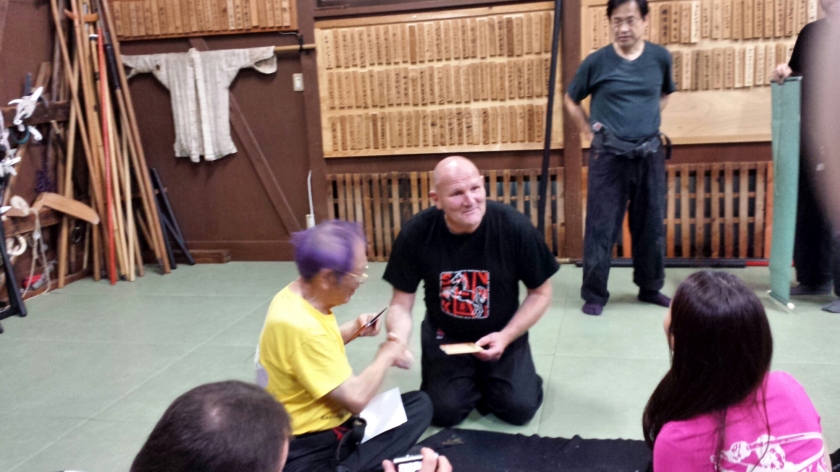 During a recent class,  while we were still in seiza after the opening rei, Hatsumi sensei began to speak. He said that: “when you are under the age of thirty it is important to develop your strength and your muscular power. Only when you get older can you train the more subtle movements”.

I don’t know what triggered his opening speech, but it is a fact that too many young practitioners lack power in their techniques.
The next day, I was in the train to Atago with my friend Marco from the Nederland, and we spoke about what sensei has said the day before.

Marco has been training for a long time in jûdô, jûjutsu and the bujinkan. And he is still training jûjutsu. I did jûdô for seventeen years and a lot of other things and I was defeated quite often.

But many newcomers in the new Bujinkan generation that we see training on the mats started their martial arts training with the bujinkan. They never had to fight in a tournament or in real life and they don’t know what it is to fight.

The worst part is that we see now some new teachers with the same  “zero” experience! When sensei aura that we have to become zero, I don’t think he means that. And these new teachers teach their beginners how it is to “fight for real”. But where did they get their knowledge from?

This is a dangerous turn in the Bujinkan and we have to be aware of it. Maybe it is the reason why sensei some about it before the class.
I’m not saying that we should have competition or that we should try to test our techniques for real, I’m just saying that we have to understand that our young students need to be more physical on the mats. If we don’t do it there might be some dangerous outcomes for them.

As teachers we have a big responsibility.

Sensei keeps saying he is teaching to the jûgodan. But for many, it flatters their ego as they understand that they are so good that sensei is teaching them the secret stuff. This is a wrong understanding.

What he means is that he is teaching students who have been training for a long time and are way beyond 30 years of age. And these senior students, because they have had their “muscular” years already, can now move to a more subtle way of training. It is because you have the ability to destroy life that you can preserve it, not the opposite.

In we compare Budō training to the gearbox of a car, we can say that today’s practitioners are always driving in 6th gear but are unable to go down to 3rd or 2nd gear. Now what will they do when in need of more engine power?

Copying the Japanese Shihan subtle movements is nice but totally useless and counter-productive when it comes to actual fight.
In Ninjutsu there is a field of practice called 幻術, Genjutsu, the art of illusion, magic. And many teachers are caught by this self illusion.

So it is important to train your students in muscle power until a certain age so that they will understand how to get rid of it when the time comes. The peaceful warrior is a real warrior with the power to use his skills to kill but who chose not to in order to preserve life.

The highest level of expertise in the martial arts is to defeat the opponent without fighting, but if you only trained the “cosmic” moves, I can assure you that the wake up call will be painful.

17 thoughts on “Be Strong, Then Soft”