In all the 16 natural weapons at our disposal, Shikan Ken is a singular one. The hand is not opened but yet not closed. The Ken changes on impact, soft and hard at the same time. And if you try to use it you often get excruciating pain when you hit the target.

When you look at the meaning in a dictionary you get many answers as usual in Japanese. But I found two definitions that serve or purpose today.

The more logical one is 士官 officer, but another definition is 弛緩which means relaxation! In the army officers are not known for being “relaxed” but then when you learn how to use Shikan Ken properly, the antinomy between these definitions vanish and begin to make sense. I will demonstrate it later.

Historically Shikan Ken was used to protect the tips of the fingers in a fight involving  鎧 Yoroi (armor) and swords . As you know the hand protection on the Yoroi is leaving the last two phalanxes unprotected. By folding the fingers, they get protected by the metallic plate covering the back of the hand.

Many other types of “Ken ” can be used in a fight such as: fudô Ken, happa Ken, koppô Ken, shutô Ken, boshi Ken. How?

不動 fudô Ken (immobility) is used for direct hit but the resistance of the Yoroi makes it problematic to be efficient, except maybe to get uke’s balance. The fingers are also well protected.

葉っぱ happa Ken (leaf) can be used for pushing or slapping  the opponent. It might create an opening which is entered then with another hiken jû roppô* weapon. The fingers are not protected here.

手刀 shutô Ken (the hand as a sword) has limited use against an opponent wearing a Yoroi, but it can come after a Shikan Ken in the development of the action. The thumb then support the plate protecting the hand and the hit is done not with the flesh but with the metallic plate. This is why in shutô, the thumb is on top of the second phalanx of the forefinger.

拇指 boshi Ken (thumb or big toe) is also usable but on soft spots only. The thumb can be supported by the plates. This is why sensei taught us three different thumb positioning when we entered the realm of Yoroi jutsu.

So as you understand it now Shikan Ken is the best suited Ken to be used in a Yoroi fight. But it also wroks fine in regular unprotected taijutsu.

Where and what to hit? The best way is to aim at uke’s face and hit the space between the neck, the Menpô and the side of the helmet. The hand shape in Shikan Ken forms a thin weapon which allows you to penetrate under the protection of the helmet. Then you can follow the action by turning it into shutô Ken or Shitan Ken to bring uke down.
In regular taijutsu, Shikan Ken against someone not  protected by a Yoroi can also be used to crush 急所 kyûsho like Jakkin, or kage; or simply use it to apply heavy pressure on a joint, the throat or any other soft spot. In fact there are many uses to it.

But if this Ken is so efficient why is it that each time we try to use it, we end up with pain in the fingers joints when we hit the target?

Long time ago when I was a committed beginner this Shikan Ken was a big and painful issue for me. Each time I would hit Uke with Shikan Ken, I was in pain as my fingers would bend too much and the nearly break.

I did my best not to think about the predictable and painful outcome of it, but with no success. And like many of you I began to discard Shikan Ken, using it only for cultural purposes (repeating the hiken jû roppô). It was like that until I decided to ask directly Hatsumi sensei how to do it correctly… On this planet if there is someone knowing this  it must be sensei. And he answered.

But before I give you Sensei’s answer, I find it amazing the general behavior of many Bujinkan visitors to Japan when it comes to learning.

Even though everyone consider sensei as his or her teacher, very few dare to cross the mats and go to him directly and ask. Instead of that, they mimic badly his movements hoping that Sensei will come to them to correct their movements. If you want to be good and to improve? Be brave and ask Sensei politely. Worst case scenario: sensei will not give you an answer.

When you go to Japan to meet your teacher, ask everything you need to know because once you are gone no one will give the answer you need. You train for your own good. Sometimes Sensei will answer you and these are the best answers as they are coming directly from the source, they are not tampered by any filter. He might also not give you any answer and this is OK too, at least you tried. If you don’t try to learn by yourself, he will not do it for you.

So one day in class I went to him and asked: “sensei why is it that each time I use Shikan Ken, I nearly break my fingers? “

His answer was so simple that I felt stupid. Here it is.

When you hit your opponent with Shikan Ken, your Ken starts from a relaxed fudô Ken (the second definition: relaxation), then on impact you have to overextend the knuckles and the hand at some angle, and tense all the fingers in the process. If you try this in your next class you will see that there is no more pain. 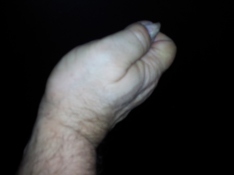 From my experience, this is the angling of the hand that is the secret.
By creating a dynamic angle, you tense the muscles of your hand, the tendons are secured and the bones are kept in place.
But remember: always begin Shikan Ken with a relaxed fist and then tense it on impact.

The basics are called basics because they are the foundation on which you build a strong taijutsu. And to know your basics, you have to research endlessly and ask a qualified person. And the most qualified person in the Bujinkan, is our Sôke, Hatsumi sensei.

One thought on “How To Use Shikan Ken?”