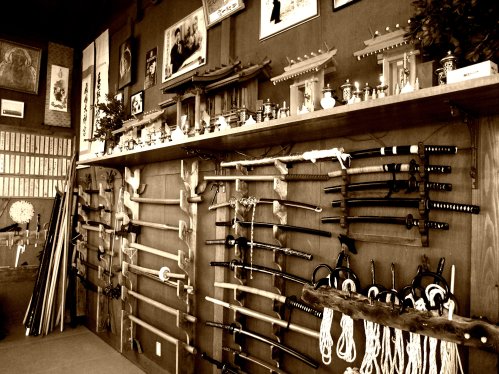 We often use the word “Henka” 変化 when referring to an adaptation of a given waza. But this word is more than it seems. I remember Sensei explaining once that in a Ryûha, a henka is described as a part of the level considered. A henka in a school is like another way of doing the same technique but respecting the 法 hô, principle of the original waza.
The dictionary gives different meanings: “change” or “variation”; but also the meaning of “transition”, as if a henka could be the passage from one technique to another. When one studies a Ryûha he is often surprised to see that the “official henka” links the waza from which it is created to the next Waza coming right after it.
Apart from these “official henka” the word in general refers to the ability to apply a prinicple of action to different situations. The Kanji 変 Hen alone has the meaning of “change” but also the meaning of “strange, curious, funny, unexpected”. When I first joined Sensei’s teachings at the London Taikai of 1987, I had no clue about anything, but even less the word henka. But I do remember vividly that each technique he was doing seemed “curious” and for sure totally “unexpected”!
Many Bujinkan practitioners do not know enough the basics and fundamentals of the art to produce correct henka, but I noticed that things are  slowly “changing” and every time I meet bujinkan practitioner in Japan or abroad I can see a positive evolution in their understanding and performance. Like many of you I don’t speak Japanese but I keep digging in my dictionaries in order to understand Sensei’s budô better. As he wrote in his book “unarmed fighting techniques of the Samurai”, it is important to understand the meaning of the names of the waza.
Hatsumi sensei is not only a fantastic martial artist, he is a philosopher of the martial arts and his teachings can be applied in our daily lives. Like Monsieur Jourdain in Moliere’s theater play, we do henka everyday without knowing it! The Bujinkan is teaching us to adapt our lives to the situations and people we meet, and we are adapting our actions in permanence without really being aware of it.
The world of henka is endless but first you need to know your basics correctly. If “hen” means many things, this is also the case with “ka”. Ka, 化 is the “action of making something” i.e. the perpetual change, the perpetual adaptation. But written differently: 下, it is “under” meaning that change lies under, invisible to our senses. Creating a henka is the action of moving something from the invisible world to the visible and sensitive world.
In my opinion this is the real lesson of this world of henka taught by sensei. Funnily, the suffix 課, ka as a stand alone also means “lesson”. This is a lesson we learn by adapting our lives to reality. It is close to the sentence we all repeat before and at the end of the class: “shikin haramitsu dai komyô”; as each action taken brings a lesson to learn from. And often the lesson is unexpected, therefore it changes the regular understanding of henka 変化 into henka 変課 .
Seeing the world differently is the strength of 歌人 kajin, the poet who plays with the words in order to manifest the beauty that lays hidden invisible around us. I have the feeling that Sensei has transformed us into 変歌人 henkajin, eccentric poets ; or to be in the mood for the kunoichi taikai beginning in a few days into 変佳人 henkajin: unusual beautiful women.
Thank you Sensei to make us 変化仁 henkajin, men of change and adaptation.

3 thoughts on “Henka: A Poetic Strangeness”