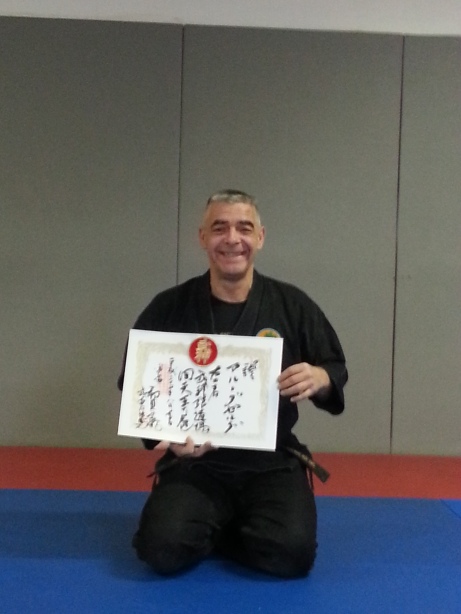 Recently Hatsumi Sensei honored me by awarding me with a diploma of Shi Tennô.

Shi-tenno (literally, “Guardian Kings,” but most often translated as “Directional Guardians”) are deities, protectors of Buddhism, who guard each of the four directions of the compass (north, south, east, and west) from harmful and dangerous influences. Originally from India, the Directional Guardians were transmitted to China during the Tang dynasty (about 600 AD), and from thence to Tibet, Korea, and Japan. The Guardians appear in paintings, such as mandalas, and especially in temple sculptures, where they usually surround and protect a central Buddha image. (…) They are known as: Zocho Ten (South), Komoku Ten (West), Bishamon Ten (North), and Jikoku Ten (East). (source Wikipedia).

In 1993 Pedro, Peter, Sven and me, were the first non Japanese students to be promoted to 10th dan. And we began to give seminars altogether all over the World. Twice a year after these seminars, we would send sensei a postcard to tell him what we were doing.

One night, at Ayase, he referred to us as being the “Shi Tennô” of Europe.

Since then we are known as the “Yûro Shi Tennô”. The Japanese Shihan: Oguri Sensei (+), Nagato Sensei, Noguchi Sensei, Senô Sensei are named the “Shi Tennô”.

This title is not a rank,  Hatsumi Sensei is referring to the nickname given by Kano Sensei to his four best students who travelled Japan to spread the Kodôkan Jûdô in the 19th century. Like Kano’s students, we would travel Europe and the World giving seminars and spreading his teachings to the North, West, East and South.

Today the only remaining so called “Shi Tennô Seminar” is the one I organize in Paris every year in July.

Since the 90s’, the Bujinkan has grown a lot. Last dkms Sensei said that the Bujinkan was now 330000 practitioners, 3300 Shidôshi, 330 Jûgodan. Even if I think that these figures are more symbolic than anything, it must be close enough to reality to understand that our organization has now reached a mature state.

My best student and friend Hugues received it for me while I was in Lebanon for the UN, but it was only yesterday that he gave it to me. Over the years, I have received all the diplomas possible from Sensei: Shidôshi (1989), Jûdan (1993), Gold medal of the Bujinkan (1994),  15th dan (2004), Menkyô Kaiden in Tachi Waza (2004), Shingitai (2011), but this one diploma has more value for me for many reasons. First there will always be only 4 “Shi Tennô” and I am really proud of it. Second, this title is coming from the heart more than from any technical ability. And Third like for the Shin Gi Tai Diploma it has the Golden patch on it.