Nagato sensei always surprises me by moving his legs reverse to what I am used to doing with Noguchi sensei.
Each time I repeat his movements I have to think hard not to move wrong.
I was training with Martin from France (Naka Ima Dōjō, Lyon), he was Nagato’s “meatbag” of the day. (2) And as he trained a lot with me over the past years, he has acquired the wrong footwork to train with Nagato Sensei. Both, we had a difficult time doing the correct first step when receiving the attack.
When Nagato sensei receives an attack, he steps backwards with the right foot. Then again sideways with the same leg. This creates a space in which he takes Uke’s balance in a natural manner. The distance created in this way, allows him to protect his body from the other fist and to dodge any second attack. Also, it prevents the attacker to kick immediately as Uke must first maintain his balance. A simple movement like that is why each class in Japan is important. Too often we keep doing the same moves, In fact, it is demanding to change our habits. Do not forget that coming to Japan is not a holiday. It is a time to rethink your taijutsu.
Humans are reluctant to change, we know it. You need to put your ego aside to get new ways to train. Coming to Japan is a chance to improve your taijutsu as a whole. I wrote many times about how boring some classes may be if you don’t try to do what the teacher is asking. When you are capable of “opening your eyes”, you discover a lot more than if you only come for an “exotic experience”.
The classes with Nagato sensei, Noguchi sensei and Senō sensei, are a perfect example of how you can learn from easy techniques. When the Japanese Shihan do a technique, it always looks simple. But when you try to copy what they want you to do, the simplicity vanishes and you find yourself lost on the mats.
During the break, Nagato sensei repeated what Hatsumi Sensei keeps saying. “at the Mutō Dori level, there is no technique.” Each time we want to do a technique we are trapped in our mind, and our body is stuck as a consequence. Apply the Muishiki concept. (2)
Trying to reproduce consciously the technique, is a paradox. How can you move “unconsciously” when you want to copy a technique. But still, it is the way to go. These conscious movements will become unconscious. But only when timing, angling and body flow are good.
My advice, after this class. Try to reverse your steps (left to right or right to left) in your next training. Whichever leg you use to be moving first, change it, and move the other one instead. You will discover a new facet of your taijutsu, hidden in plain sight.
Hatsumi Sensei said once that Budō is the art of making the invisible, visible. Do that, and some invisible side of your taijutsu will come to light!
The Japanese Shihan have been training with Sensei more than any of us. Those great teachers were not good at the beginning. If they are good today, it is because they kept going and remodelling their certitudes into new ones. We call that progress. If you don’t progress, you stagnate.
Do the same and spread your wings. Budō is endless, it only ends when you die.
And remember, in your next class, to move the right leg instead of the left leg.
_______________________
1. Naka Ima Dōjō https://www.facebook.com/groups/1032901296778142/
2. On Muishiki read https://kumablog.org/2018/07/28/muishiki-unconsciousness/
Note to Koi ALL ACCESS members: You can see some of the movements we trained on http://www.koimartialart.com in the “Dōjō: Tips and Tricks” section. HERE
You want to join? CLICK HERE 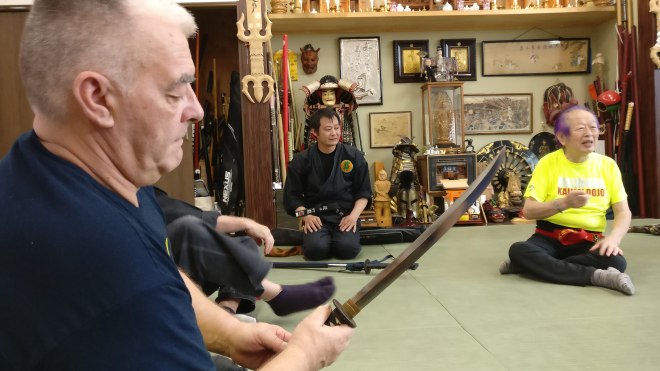 As far as I remember, Sunday classes at the Honbu are special. When at the old Honbu, Hatsumi Sensei always invited a few of us to lunch with him. We moved to the new Honbu in February 2015, and this tradition stopped. Sensei is now more talkative.

I used the word “tradition” voluntarily here. What is a tradition? Google says, “the transmission of customs or beliefs from generation to generation, or the fact of being passed on in this way.” What he did was to share the Bujinkan spirit with his older students (October 1997 and February 2015).
At lunch, he would take the temperature of the Bujinkan, and speak about the Bujinkan. I have good memories of those moments.

But in the recent Sundays, Sensei moved from “tradition” to history. He often speaks now about the old Jidai. (1) With better knowledge about history, he wants us to prepare the future Jidai of the Bujinkan. (2)

He wants us to understand the symbol of Samurai warfare, the sword.

Last Sunday, he arrived from his usual sword dealer with six new swords and detailed them to us. He said, “high ranks must understand the Japanese sword. This is the key to unlock the understanding of Mutō Dori.”

History is significant when you train martial arts, this is not a sport. Japanese history is about survival, and these weapons made it possible.

By understanding the weapons, you get a glimpse on how you can move with them and survive in battle. And he wants the Dai Shihan to get this.

History comes from the Greek ἱστορία – historia, meaning “inquiry, knowledge acquired by investigation.” It is Rekishi in Japanese. History is the discovery, collection, organization, and presentation of information about past events. (3)

We have to study Rekishi should and investigate it seriously. That is if you want to get the knowledge of the Samurai.

Our Waza were created during the Sengoku Jidai, (4) -what historians call the “Age of Warring States.” This period began with the Ōnin wars (1467-1477) and lasted for about a century. (5)

Oda Nobunaga emerged from this time of chaos and began the unification of the country. It will end with Hideyoshi, and bring Japan to peace with Tokugawa. This extended period of five centuries is the Bujinkan Jidai!

The history of the Samurai is what makes Japan so different from our own history. Initiated by Minamoto no Yoritomo with the Genpei War (fall of the Taira in 1185), a new Japan is born. (6)

The victory of Tokugawa at Sekigahara in 1600 completes the transformation. (7)

Our fighting arts are the means with which these changes were carried out on the battlefield.

Ignoring Rekishi is limiting the Bujinkan to another sport martial arts.

Thus the reason why Sensei wants us to study it.

The dōjō logic replaces the military needs with a form of business at the beginning of the 17th century. It is very far from the Yoroi logic developed on the battlefield. 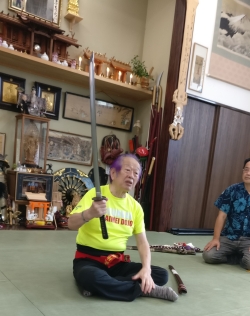 This is during this period that the Katana (Edo) replaces the Tachi (Sengoku). As a consequence, Tameshi Giri will develop only after the Samurai stopped fighting. (8)

This is the knowledge Sensei wants us to get.

One thing Sensei said on Sunday, was that “you should know what weapon is good for you.” Study them and use the ones that fit your abilities.

The Bujinkan Rekishikan (9) covers the 12th to the 17th century.

It should be studied like any other Waza.
Rekishikan can lead to Reishikikan, and give us “the intuition to have the correct manners of a knight.” (10)