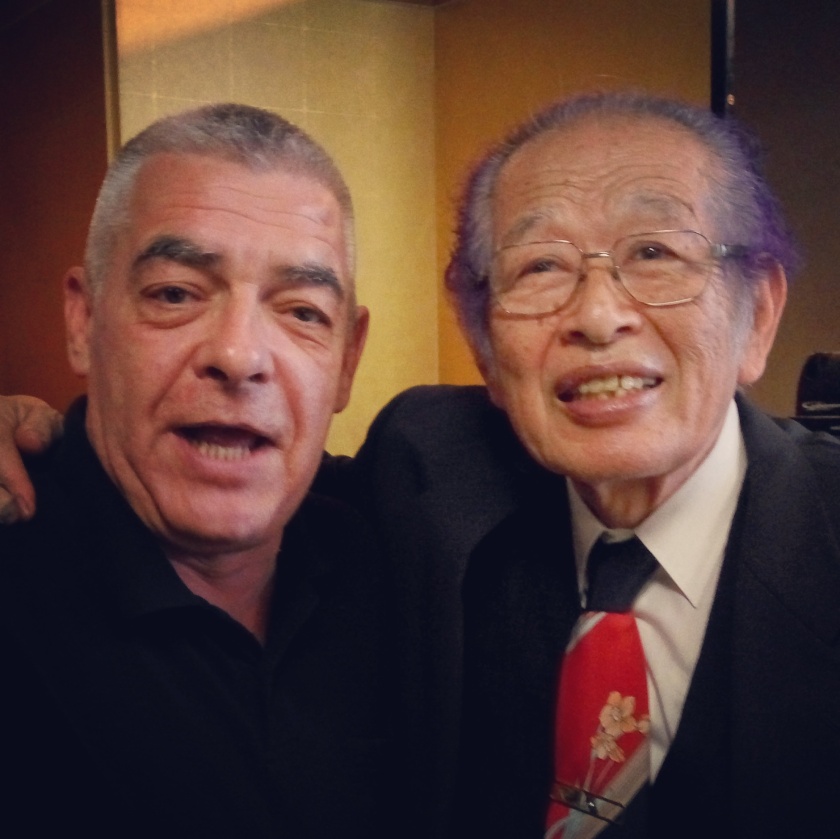 The Daikomyō Said is always a magic moment in the life of the Bujinkan. This year was no exception.
The format has evolved over the years. Training halls have changed many times until there were no halls and no training sessions.
The formal dinners at the Hilton or the Noda Park hotel, replaced the open party at the Honbu until there was no more dinner.
Today, there are regular classes followed on Sunday by a small lunch party. And this is fine because the feeling is still the same.

Daikomyō Sai is not only about Budō, but it is also more about respect Kumite. Apart from the techniques taught during this period of the year, this is the chance to spend some quality time with friends from all over the world, around our Sōke, for his birthday.

Every year the group gathering in Atago is about the same. Sensei has created a formidable group of friendship where borders don’t exist anymore. This is really a very special moment for all of us. This year again, many made the trip for Sōke’s birthday.
Moti from Israel; Sheila, Jack, Jay, Michael, Phil, Par, Ed, Doug from the USA; Juan-Manuel, José and Rosa from Spain; Peter from the UK; Koosje  from the Netherlands ; Laszlo from Hungary; Oliver, Stefen and Jacqueline, Michael, Alexander, Raphaëla, Simon from Germany; Christian from Argentina; Lubos from the Tchech Republic; Lauri from Finland; David from Colombia; Harry and Adonis from Greece; Faraji from Iran; Jorge from Chile; Ole from Denmark; and many others. Sorry for the many names I forgot, and for the students that made the trip to the Honbu this year. But thank you all for being there.

During his birthday speech, Sensei said the Bujinkan has spread a lot in the last 42 years of its development. Today the Bujinkan regroups more than 500000 practitioners worldwide.
Sensei went back on the “42” cycle. When Takamatsu Sensei told him “I taught you everything” back in the seventies, Sensei said that he had no clue at all. But after “teaching for 42 years what he didn’t understand, I now know what he meant at that time”.

We are beginning the third part of the Sanshin. And he is confident that the next 42 years will be good. (1)

Being now 85 years old, he has covered two “42-year cycles”. The third period of this Sanshin cycle is beginning, and that it is our responsibility to take over, and to bring it to the next level.

Later, he added that “we now have over 450 Jûgodan and 4200 Shidōshi (another 42) in the Bujinkan, I’m confident that within this vast group, many good men and women will continue to walk the path initiated with Takamatsu Sensei”.

“Ichigo Ichie” (2) he added, “it’s not an issue of time, but moments in time, a continuation of moments. I have a happy life. Enjoy your life, enjoy those moments, and don’t think so much”, were his words of conclusion.

Thank you Sōke for the gift!

Only a few days left to get your 25% discount. Go HERE to know how to get it!