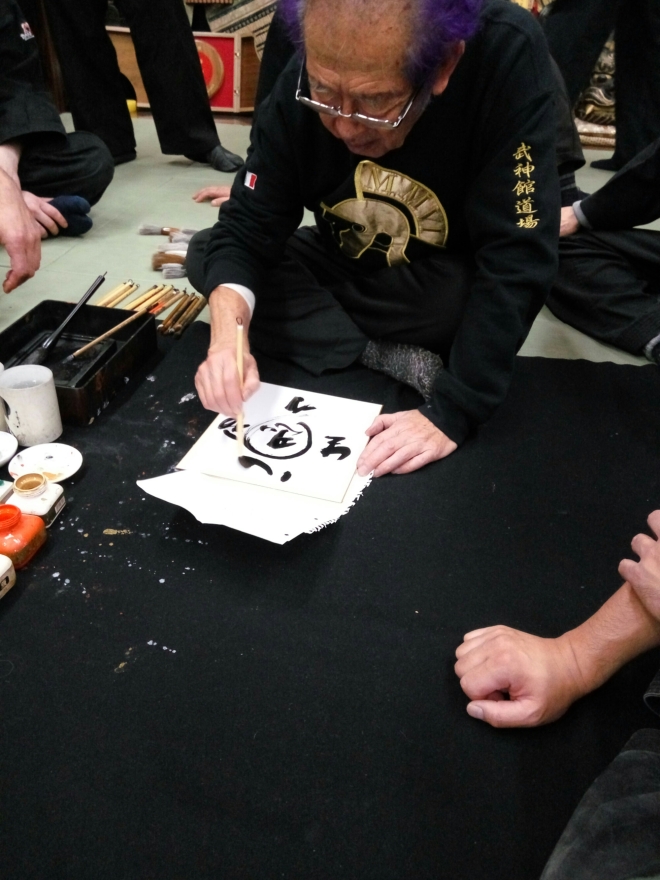 The last class was about “zero style”. To be zero, you have to be one, body and mind. Sensei’s movements are so simple that it is impossible to repeat them. Sensei was magic and full of energy, and we saw how far we are all of his level of understanding.

After class, I went for dinner with Philippe, the Mitrou brothers, and a few students. We all felt drained as if emptied of our energy (maybe he sucked it out from all of us). The dinner didn’t last long; we went to bed rapidly.

Once again, this magic of Sensei reminded of the Taoteking: “Accept, and you become whole, once whole, the world is as your home.” (§22 Taoteking)

Sensei wants us to be “zero”, but zero is not nothing. Last July he said that “at the centre of zero, there’s one”. To achieve this zero state, we first, must become “one”. And for me, this “one” is the same as this “whole” depicted in the Tao. The “wholeness” is the result of acceptance and receiving. In Japanese, it can be translated by “Ukeire”. (1) Ukeire also has the meaning of receiving as in Uke Nagashi. (2)

It means that when you accept (receive) the attack of your opponent, you trap him in the space you control, and you can play with him. There were a few references to “Asobi”, playfulness, during the last classes. (3) This control of space is similar to a spider web. Tori is the spider, and Uke, the fly. He has no chance to win once wholeness is achieved.

Each time I attack Sensei with the intention of getting him, I don’t succeed. In fact, the harder I try, and the faster he traps me. Sensei is like a spider waiting for a bug to glue into his spider web. It is quiet and efficient. Uke is unable to think properly, and to surpass his defences.

At some point, Sensei referred (again) to the bug held in the space of your hands and being unable to bite: Amo isshun no tamamushi. (4) As a bug, you cannot decide what to do. It is scary. You see your defeat the moment you launch the attack. There’s nothing you can do to avoid it. Sensei repeated a few times “Tatakai Janai”, don’t fight. (5) In fact, there is no fight per se. As you are the only one trying to fight, you end up fighting yourself.

Being the receiver, he doesn’t need to hurry, as the Uke, I am delivering myself to him. Whatever the type of attack, he waits for it, receives it, and weaves his actions on the many elements I’m giving. He has no intention of winning; he simply doesn’t lose. He controls the space; there is no fight. Being united as a whole, he receives and accepts my attack, and “the world is as his home”, I’m just a bug for him to play.

The ancients said, “Accept, and you become whole”, Once whole, the world is as your home. (§22 Taoteking)

This is Ukeire, the Tao of the Bujinkan.

____________________
1. 受け入れ/ukeire/receiving; acceptance
2. 受け流す/ukenagasu/to ward off; to elude; to turn aside (a joke)
3. 遊び/asobi/playing|play (margin between on and off, gap before pressing button or lever has an effect)
4. Amo isshun no tamamushi
中一瞬 の 吉丁虫
中 amo: centre, inside, during
一瞬 isshun: one moment
吉丁虫 tamamushi: jewel beetle
5. 戦い/tatakai/battle; fight; struggle; conflict