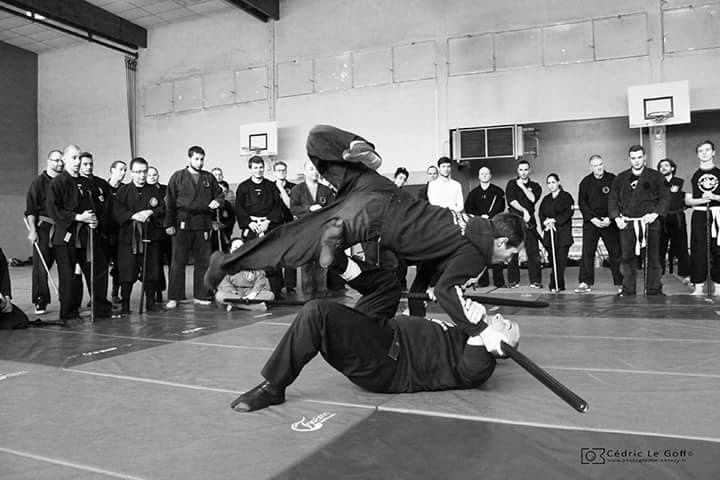 It is important to understand the responsibilities that are bestowed upon you when you become a black belt.

In the Bujinkan, it is easy to get a black belt after three to four years of regular practice. But things are more complicated than you think. When you train in the martial arts you are on a quest for yourself, you are not only training to get a reward.

A black belt comes with responsibilities. Too often, I see students freshly promoted to Shodan, stopping their training. Before they achieved this “precious rank”, they were attending every class. Today, we hardly see them during practice. And when they come, it is to teach their lack of knowledge to those who are still in the process of getting it.

The real training begins when you get the black belt. Everything else is a total misconception.
For the Japanese, becoming a black belt means that you are accepted in the dojo as a beginner. You still move poorly, but your teacher, your sensei, recognized that you have acquired the fundamentals of the given martial art that you have elected. Shodan is the first step.

Before it is like kindergarten, you learn how to read, write, and do basic maths.

As a result, it is not uncommon, to see only beginners training in the dojo and not so many black belts. Even though, the dojo has many of them. Suddenly, they do not have to attend training, as regularly as when they were trying to get this black belt.

In French, we have this saying “noblesse oblige”, (a translation could be “Nobility obliges your actions”). It comes from feudal times but remains still valid today. As a black belt (a nobleman), you have a duty. You must behave as an example to the beginners (the ordinary people).

Whether you think of yourself as being a samurai or a ninja, it doesn’t matter. What does matter actually in the dōjō, is that your Black Belt forces you to excellence. The ancient Japanese Samurai called that your “duty.” This duty is better known to martial arts practitioner as 限 “giri,” the sense of duty and honor. (1)

In the Modern world, a Samurai would be the equivalent to an army’s officers.
In the military, an officer leads by example in front of his men. He demands what he can do.

As a black belt, you should behave like an officer, when you are on the mats and be an example for everyone.

Having a good technical level is expected of you, but having high ethics and morality, commitment and resiliency is even more important.
These values are showing that through training, you have developed as a human being. It indicates that intense practice has impacted your attitude in life. But if you are a black belt and not attending class anymore, how can you show it? How can it last?

As I said above, the Shodan is the first step in your progression. When are you going to begin to climb the staircase to excellence, if you are not attending classes regularly?

The Bujinkan is like water, if you don’t keep training, it will evaporate, and your diploma will simply be a meaningless piece of paper.