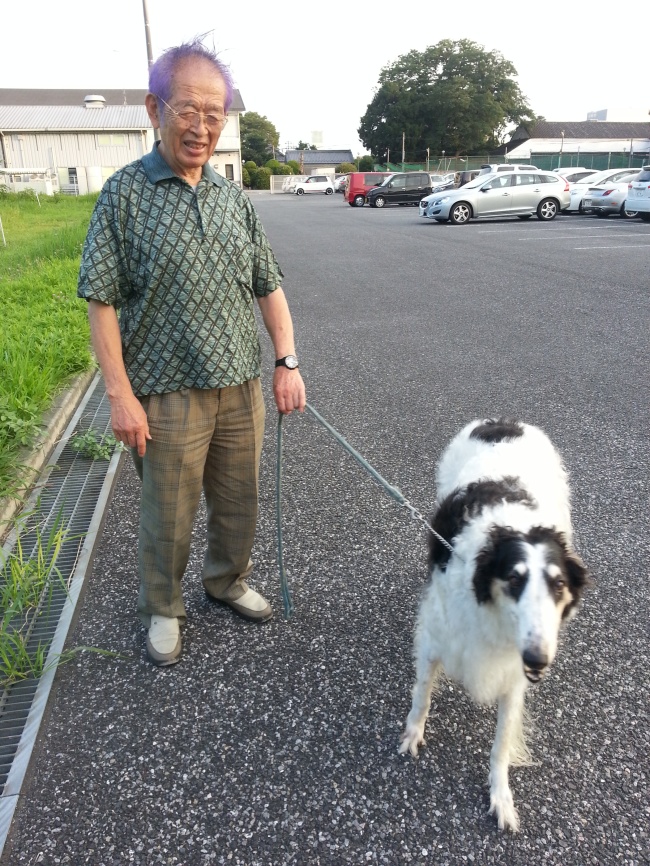 After the post on “Koto vs. Gyokko”, I received a few comments by Bujinkan members not agreeing totally with what I wrote.

The main questions being:
1) the relative distance of the school’s (short and long); and
2) the “new” Kokû (inside / outside).

So as I had an appointment with Sôke before the class I decided to ask him directly. It is always better to ask the source.

When I arrived to his house, he was ready to go out to walk his barzoi dog, so I went with him. While we were walking to the “dog relieving spot”, I saw a short window of opportunity to ask about those two points. His answers are given below, between brackets.*

Distance: “everything that we train now is Juppô Sesshô so all distances are correct”.
When it comes to physical fighting, the distance is the distance of contact (arms or legs). But the Koto (the tiger) jumps from further away, you are moving into the center. The Gyokko (ie. Gyoku+ko) waits for the attacker, you are the center of the sphere (gyoku = 玉, ball, sphere, pearl).

The Chinese and the Japanese have this image of “crouching tiger, flying dragon”. In 2003, the first year of the Juppô Sesshô cycle, the full name of the theme was “Koteki Ryûda Juppô Sesshô Hibun no Kami”.**
Symbolically the Chinese dragon/tiger image is a representation of yinyang***. They are therefore complementary (as stated in my post). The title “Koto vs. Gyokko” should have been written “Koto/Gyokko unity”. You find a hint in Hatsumi sensei ‘s book in the chapter concerning the Gyokko Ryû. Did you notice that at the beginning of the chapter, sensei writes about “Gyokko Ryû Kosshi Koppô Jutsu? Then the natural opposition is replaced by a strong unity.

Kokû: “each one expresses it differently, everything goes, this is Juppô Sesshô that we are expressing these days”.
Then still holding the leash around his wrist, he stopped i the middle of the street and asked me to attack. I did as ordered and he naturally extended the left forearm to receive/cushion the attack while nearly simultaneously digging a deep and painful boshi Ken*** at the joint of the elbow. “This Kankaku is important” he said.

I wish I could have taken a picture of this particularly moment.

And to end this, my post was not about the Gyokko Ryû or a specific way of doing a given waza, my point was to explain that the diversity of interpretations that you find in Japan when you train opens up new worlds of opportunities when your eyes and spirit are ready to see and understand: 神心神願, shinshin shingan*****

____________________
* caution: sensei varies his answers depending on the moment, or the person asking. My point is that he might have said the opposite and still be correct.
** Koteki Ryûda: crouching tiger, flying dragon
Juppô Sesshô: negotiating in all directions
Hibun no Kami: (is the) secret expression of the gods
*** the tiger and dragon in the I Ching http://www.biroco.com/yijing/dragon_tiger.htm
**** boshi Ken is typical from the Gyokko Ryû

*****神心神願, shinshin shingan: the eyes and the mind of  the gods